The X One Design (XOD) Class of sailing boat has a history reaching back 116 years and boats from the 1920s still race in The Solent. The XOD’s prolonged working lifespan and classic design combine to produce a boat that attracts some of the best inshore sailors on the South Coast and XOD racing remains intensely competitive. So, when Isle of Wight-based Whittle Marine received permission to build a new XOD – something that hasn’t happened on the island for around 30 years – the company’s aim was to produce a traditionally-built, attractive, fast and strong boat that will last for over 60 years of hard racing.

Over the long winter in Thorley just east of Yarmouth on the West Wight, the team at Whittle Marine has been focused on building the hardwood hull of their new XOD; a task that requires immense skill, patience and a grasp of traditional boatbuilding knowledge that is rapidly disappearing. An XOD’s hull is a Y-shape type in cross section providing the attractive wineglass form typical of classic yachts. This is, arguably, the most demanding and time-consuming type of hull to plank due to the multitude of soft curves, shapes and the design’s flowing lines.

In profile the XOD has an attractive, sweeping sheerline where the hull meets the deck, dropping back from the bow gradually before rising again to meet the stern (see image of XOD plans below). Below the water, the rocker (the overall shape from bow to stern) begins gently at the bow, bottoms out in the middle of the keel before sweeping upwards towards the waterline to meet the raked transom. Even without a basic knowledge of carpentry, it’s evident that attaching a plank to this complex shape is a challenge.

Add the boat’s wineglass cross section into the equation with the convex curve at the bow changing gradually further aft and filling as the hull meets the keel until the deadrise (the area directly above the keel) becomes convex as the hull rises to join the transom. This is a beautiful shape, but every boat builder will admit it is brutally demanding to construct. Blaise Russell, head boat builder at Whittle Marine, explains the process: ‘First you have to spile the plank,’ he says. ‘You use a flexible piece of timber which is thinner, narrower and longer than the actual plank you will eventually fit and this spiling batten becomes the template,’ Blaise continues. The batten is temporarily fitted to the hull and a dummy stick (a small, square piece of wood) is run along the batten guiding a pencil marking the shape of the plank. This template is then transferred to the timber supplied for planking. ‘The result is a corkscrew-type shape following the curves along the hull.’

In August last year, a 2.5-tonne, 34 feet long hardwood tree trunk of sawn Sipo timber arrived in Thorley following a 7,000-mile voyage from Gabon on Africa’s west coast via a sawmill in Germany. ‘The resulting hull plank’s shape after spiling isn’t a straight piece of wood,’ says Blaise, ‘and it has to be cut from a very wide piece of the tree which is why you have to buy a whole tree and be very careful about cutting, always trying to think forward to preserving as much usable timber from the tree as possible without wastage.’

With the Sipo plank cut to shape, the edge is then bevelled so half the plank’s edge will be in contact with its neighbouring plank allowing a strip of Pine or Mahogany, known as a spline, to be glued between the planks on the hull’s exterior adding extra strength and stability. Finally, before the plank is fitted, the team try to make any future finishing work or restoration on the boat’s interior as painless as possible. ‘We know how fiddly it is to get a good finish on the interior,’ Blaise explains, ‘so we ensure we get a top-quality finish before the planks are fitted.’ The oak ribs supporting the planks and the interior side of each plank are varnished to a high standard to delay the hideous task of crawling around beneath an XOD’s foredeck and aft deck with scraper and sandpaper prior to re-varnishing. ‘It’s a horrible job to restore a boat’s interior and we aim to give the owner as long as possible before they have to even think about the task.’

The plank is then clamped in place on the hull, holes are drilled to recess the nail ready to take a finishing plug and copper, square nails are hammered through. To ensure the strongest bond, a copper ‘rove’ or rivet is placed over the inboard end of the nail and hammered tight. ‘Roving is so superior to screwing as it becomes a permanent clamp,’ says Blaise. ‘As the boat goes through 50 seasons, it dries out 50 times and as each boat will take on an average of around 20kg of water in a season it will, obviously, expand and contract when it’s out of the water. With a rove clamping it all together it becomes solid. If you used a screw, the timber’s movement would, over time, create loose and sloppy planks.’

This meticulous process is repeated 14 times on each side of the boat from the garboard strake at the transition from keel to hull, to the sheer strake where the hull meets the deck. ‘The main thing about these boats is you’ve got to remember you have to work with wood and it isn’t static like fibreglass,’ warns Blaise. ‘As the material was once living, it can move and twist with time, so that’s why the seasoned AAA timber sourced for a build is so important.’ 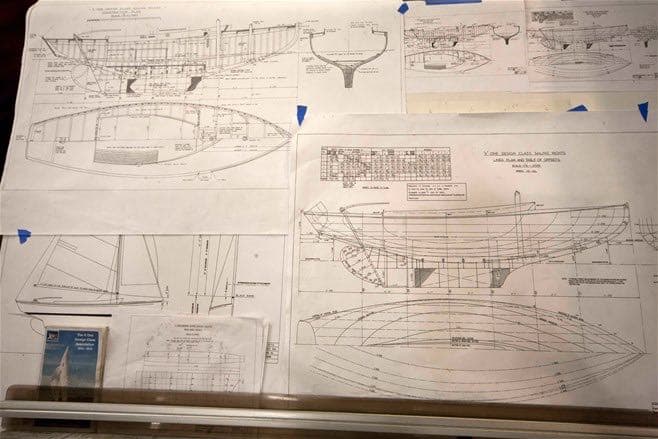 A few remaining planks to fit port side Bevelled plank edges at the transom Copper roves are visible on the hull’s ribs