When Isle of Wight-based Whittle Marine received authorisation from the X One Design (XOD) Class Association to build the first new XOD in Yarmouth and to launch since the 1980s for the island, the primary objective was to locate and secure the highest quality timber available. On Wednesday 20th August this year, a 34-foot, 2.5-tonne hardwood log of Triple-A Graded timber from Central Africa arrived at the Whittle Marine yard in Thorley.

Unloading the dark red log marked the end of a 7,000-mile journey by sea and land from the sovereign state of Gabon straddling the equator on Africa’s west coast, via a sawmill in Germany, across the English Channel and the Solent to its final destination on the Isle of Wight. Not only does the log represent a substantial investment for Whittle Marine, sourcing this premium timber is vital to building a truly exceptional boat.

Since 2005, Stones Marine Timber in Salcombe, Devon, has been the premier importer of high-quality wood for boat building and the company’s timber has supplied many of the top marques in the yacht building and refit industry including Spirit Yachts, Oyster Yachts and Pendennis Shipyard. Timber selected by Stones Marine arrives in Europe from Canada, Burma and Africa and is turned into masts and boat exteriors and interiors.

Dealing directly with sawmills in Canada, Burma and Africa also allows Stones Marine the first pick of top quality timber, rather than the lower-quality ‘left-overs’ often available once the lumber has reached Europe.

From Africa, Khaya and Iroko hardwoods are sourced by Stones Marine and – as in the case of the Whittle Marine XOD – the reddish-brown Sipo; a timber (often known as Utile) that has anti-rot properties, consistent colour, an easy grain to work with and prodigious strength and – when responsibly harvested in Gabon – is registered in compliance with the rigid requirements of CITES (Convention on International Trade in Endangered Species of Wild Fauna and Flora) and the EUTR (European Union Timber Regulations).

The majority of Stone Marine’s timber is sawn at source in local sawmills as, with the exception of Africa, there is a worldwide ban on the export of raw logs. Stones Marine opted to ship Whittle Marine’s 34-foot, Sipo log to Germany uncut. Tristan Stone explains: ‘There are skills and facilities in Germany that are first class,’ says the younger half of the Stones Marine father-and-son team. ‘In Germany there is a high demand for long lengths of sawn oak which is very popular for paneling houses, so the large workshops and extremely accurate sawmills are already in place.’

Once sawn, the traditional option of air-drying the Whittle Marine XOD timber was impractical: ‘With air-drying, the timber only dries at about one inch per year,’ says Tristan. ‘A sawmill or timber merchant cannot store timber for that long before moving it on; it’s just economically unviable for a successful business.’ The alternative is kiln-drying and the Germans have ovens capable of drying immensely long lengths of timber. ‘A kiln can quickly dry timber down to 14 per cent of its original moisture,’ continues Stone.

However, there are pitfalls with kiln-drying. ‘If the timber is placed in a kiln too soon after sawing, “case hardening” is almost inevitable,’ he warns. Stone explains further: ‘A period of air-drying allows the timber to stabilise before going into the kiln,’ he says. ‘Most modern kilns dry the timber quite rapidly and there’s a risk of a moisture gradient developing between the surface and the centre. This can cause residual stress and collapse on the surface.’

Timber that is weak and flexible is of no use to boat building craftsmen. ‘The technique to prevent case hardening is to store the timber for several weeks in a stack with sticks separating each plank permitting air-flow around the timber and this lets it “relax” before putting it in a kiln,’ adds Stone.

Following several weeks in the German kiln, the sawn log was reassembled and strapped together for shipment to the Isle of Wight. Since the Sipo log arrived at Whittle Marine in mid-summer, part of the lumber has already been used to make the breast hook for the bow; six quarter knees and the transom knee.

Sipo will also be used for the combing and the back valance bulkhead to the rear of the XOD’s cockpit. The bulk of the Sipo, though, will plank the XOD’s hull with 14 planks to each side of the boat with the planking planned for completion by Christmas this year. 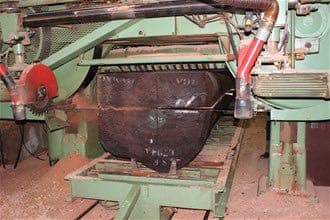 Preparing the timber for storage at Whittle Marine Preparing the XOD hull for planking